by Sandra Provan The LaPorte Herald-Argus

Willie Waldman’s infatuation with the trumpet has taken him a long way from Westville, where he grew up.

When he was 7, his parents, Bill and Dolly, finally gave in to his begging for a trumpet and he began Saturday morning lessons on the instrument.

As he got older, he played for Christmas and Easter services at his church, St. Paul’s Episcopal in LaPorte.

At Chesterton High School, Waldman joined the marching band, which has enjoyed many successes in state and national contests. From there, Waldman went to Memphis State University on a music scholarship.

While he was a student there, Waldman met such living legends as Herman Green, Calvin Newborn and Jimmie Ellis. His first paid gig was at Club Handy, where Green took him to task.

He became a member of Herman Green & the Green Machine, playing with James Williams, Mulgrew Miller, Kirk Whalum and others. In 1987 Green and Waldman decided to take a differerent tack with their music, to reach a younger audience with more of a rock/fusion flavor.

This concept led to the formation of FreeWorld, which became an educational breeding ground for many musicians who have become Waldman’s firm friends. The group toured with acts like Stevie Ray Vaughn, The Robert Cray Band, Albert King and Joe Cocker.

By 1994,, Waldman had reached California where his friend and engineer David Aron was working with Death Row Studios. Aron was mixing and recording Snoop Dogg’s latest release and Snoop wanted more brass in the recording. Waldman was in the right place at the right time because that led to more work on studio soundtracks and commercials.

Waldman’s CD, “Trumpet Ride,” came out in January and is getting a lot of radio time” Waldman said in a telephone interview Tuesday. It’s being played on radio stations in Philadelphia, Chicago and Detroit and is available at Tower Records and Borders Book Stores.

Three of the pieces on this CD, “Surfin’ Dog,” “Happy Days” and “7th Dimension” were used during the 2002 Olympic Winter Games in Salt Lake City.

Next week he’ll be playing at the Wise Old Fools, 2270 N. Lincoln Ave., Chicago, then in Bloomington May 11 at the Bluebird Club, and in Indianapolis May 13.

“The band’s coming in from all over the country,” Waldman said. “I met these guys during studio work in Los Angeles. It depends who’s free when; you don’t have to have the same guys every day to make things happen.”

During this Midwest swing, he’ll be able to visit his parents in Westville for Mother’s Day. Waldman is married to the former Renee Richter of LaPorte. “Renee worked at Droege’s in LaPorte for 15 years.” Waldman says. “She misses her girlfriends, but she’s getting used to California. She feeds the whole crew; the bachelors come over for pot roast.”

Waldman feels lucky to be able to do what he loves for a living – play his trumpet. 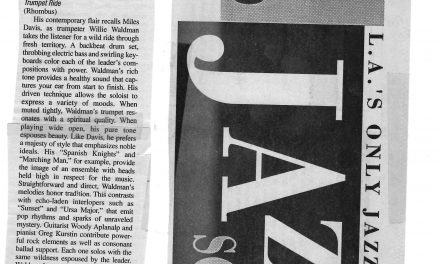